Rent a wedding car on Mallorca

for your journey into happiness

Rent a wedding car on Mallorca

for your journey into happiness

Arrive with style at the altar

If you want to drive up to the wedding altar with class, you are spoilt for choice. The donkey brings luck in Spain, the Beetle cabriolet enjoys worldwide popularity and more style than with an old, maintained Mercedes-Benz can not move. Not all bridesmaids fit into the beetle? The T1 VW camping bus offers enough space. With refrigerator. Filled with cava. 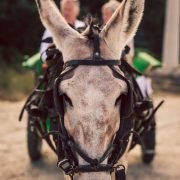 In Sencelles carriages are lovingly kept in shape. At the annual patron saint’s festival the villagers regularly fetch their carts from the garages. Normally it is horses that pull the carriage, but donkeys in Spain bring luck and should therefore not be missing on a rural wedding.  The donkey cart is taut and beautifully decorated, and it takes the bride at walking speed through the almond grove to the altar.

For almost 75 years, the Beetle has been thrilling drivers all over the world. This pastel white model from 1973 is characterized by the typical large tail lights, called elephant feet and captivates by the loving care of the beetle lover Karen. 50 HP push the Cabrio comfortably by the idyllic island roads. 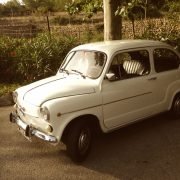 The Seat 600 is the somewhat less known Spanish brother of the Fiat 500. Launched in 1957, it was the perfect car to get into even the smallest streets of Spanish towns and villages. Cosy and reliable, the little car winds its way through the narrow country roads to Alaiar. Lovingly maintained and freshly painted in 2015, this car is only for rent to drive yourself. 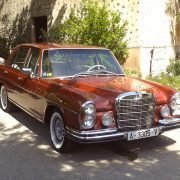 This 1972 Mercedes 300 SEL is a rarity. In the 1970s it was used by the Danish Embassy in Madrid. In the W109 series, the air-conditioned limousine offers a longer wheelbase and thus more comfort in the interior. Everything on the vehicle is original. With 6 cylinders and 170 HP the French owner and car lover Christian drives you smoothly as this car model provides typical air suspensions of this model. A smooth ride into happiness. 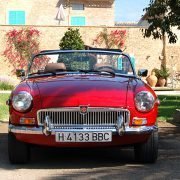 MGB Scarlett was built in 1971 and has chrome bumpers, an original black interior and a luggage rack for a medium-sized suitcase. The black soft top has a rear window with zipper. The sound of the 1.8l engine is music to the ears of every car enthusiast. It is a dream to drive this car through the beautiful nature of Mallorca. 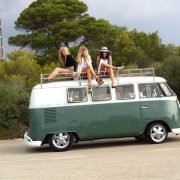 David owns the cosy Bar Cubano in Andratx. And if he doesn’t work too long in his bar, he screws around with his favourite cars, which include the old VW camping car. He acquired it in the United States, but the T1 also feels at home in Mediterranean latitudes, because slim as it is, it winds its way around the tightest curves of the Majorcan serpentine roads. There is enough space in the interior. Luxurious highlight: the on-board refrigerator and the opening windscreens. It’s also going fast, because his favourite was equipped with a Porsche boxer engine.

Have we aroused your interest? Then book your wedding car now!